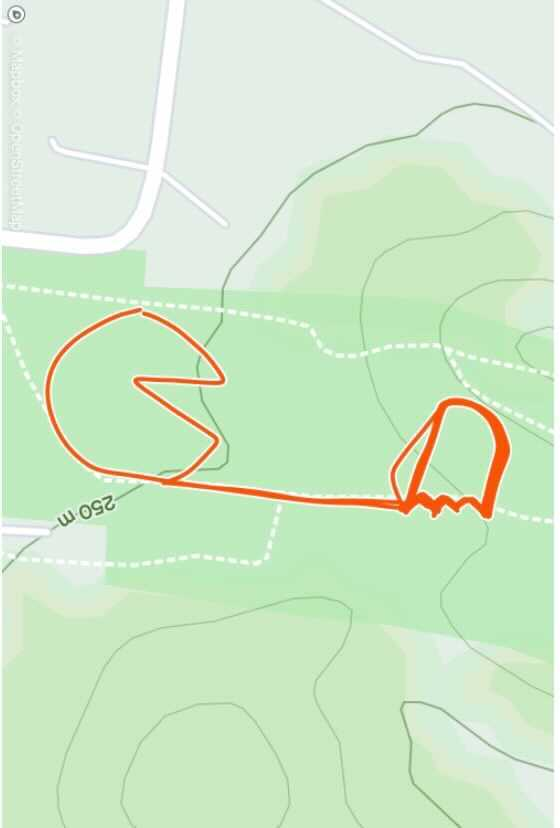 @Sully @Bogo @Sack @Jalisco @Winger (Bill Diebenow) @Three’s Company @MaryAnne @Peewee @Fertile Myrtle (holding down the fort) and YHC @2Buck
10 HIM rolled out of bed after an evening of rolling thunder and lit up the hills of Preservation Park. Synchronous watches were paramount to making this morning’s running art a real thing of beauty. It meant a few steps would be sacrificed in order to make the work of art a true masterpiece.
PAX moseyed to the starting area and followed 2Buck off trail and through the field. We zigged and zagged as the guesses of what we were writing or drawing began.
“It’s the letter Z”
“We’re spelling Zebra”
“How do you spell CHUMP?”
Once the warm up mosey ended we were introduced to a 7 station AMRAP demarcated by tiny flashlights enclosed in baggies and placed under a soccer cone (beacons)
20 SSH
10 Split jump right (1/2 iron mikes?)
10 split jump left (the other 1/2 of iron mikes?)
20 calf raises
30 high knees (each side is 1) – Lunge walk to 6
Lunge walk to 7
20 SSH
At the conclusion of each round we charged up the hill and around 4 more beacons, returning to the beginning of the 7 station AMRAP.
More guesses:
“It’s Charlie Brown”
“We’re sowing a dress”
“It’s a blouse”
As a PAX we then moseyed toward the starting spot, taking a circuitous route that completed the running art.
Additional guesses:
“It’s a King and a Queen”
“It’s someone with a sword”
“It’s someone passing out a mask”
Answer:
“It’s Pac-man chasing a ghost”
Announcements
Convergence is 3/27.  Start EHing all the guys you know!!
Meal Plan (Now known as The Queen 2.0) will begin 4/5. More details to follow…but join #the-queen channel to stay up to date
Prayer requests
@MaryAnne allergy issues
Moleskin
The PAX Man
Pac-man faces ghosts
We fight a spiritual battle and we can’t fight it on our own, we need to prepare by putting on the full armor of God.
Ephesians 6: 13-18
We worked out at 7 different stations to prepare for trail running. Those Seven stations represent the 7 things we are to do to prepare for spiritual battle.
Put on the
belt of truth
Breastplate of righteousness
Shoes of peace
Shield of faith
Helmet of salvation
Sword of the spirit
Then pray
Sometimes a call to action appears inactive.
Put on the armor…and then pray.
Let’s spend time praying!