Skip to content
9 Glorious HIM took over the Duplex Dip to run, slip, slide, and pull their way into a better day!
PAX @Heidi @Jalisco @Kwame @Chowdah @Pancreas @Fertile Myrtle @Joey Freshwater @Peewee
ROUTE:
Start at the Intersection of Duplex and Commonwealth.
Run east to Port Royal.
Turn around and run west to Miles Johnson
Turn around and run east to Commonwealth
Pick up the six
Mosey east down Duplex 100 yards
SLED RUN: (see videos and pics from @Pancreas in thread)
YHC and planted a rope and a large plastic lid on the side of the road.
The Pax lined up single file facing up hill. The HIM at the back sat on plastic lid and held on to end of rope
Remaining HIM towed the sledder up the hill
Every 10 yards slender gets off and moves to the front of the line. The HIM at the back of the line now becomes the sledder
Failure to launch
4×4 push-ups (see additional footage from @Pancreas )
ANNOUNCEMENTS:
@Fertile Myrtle is maintaining a slim lead on the Strava leaderboard over @Chowdah
@Kwame is heading to Battle Hill for some sledding at 10am
PRAYER:
@Pancreas friend Michael has gone home from the hospital but will still have a long road to recovery
Family in Brentwood whose son dies in a sledding accident yesterday. Pray for peace and comfort.
MOLESKIN:
Today we worked as a team to pull a HIM up a hill using a rope. A man whose friends used a rope to lower him through a roof to be in front of Jesus was healed as a result of their faith.
Luke 5:27-26
When Jesus saw their faith he said, “Friend, your sins are forgiven…I tell you to get up, take your mat and go home.”
Jesus forgave and healed this man based on the faith demonstrated by his friends.
When you are facing something difficult allow your friends to come along side you and support you.
When you see someone going through something difficult, don’t just tell them you will pray for them, but take up a corner of that mat and bring them to Jesus.
Proud to stand next to you in the gloom.
2Buck 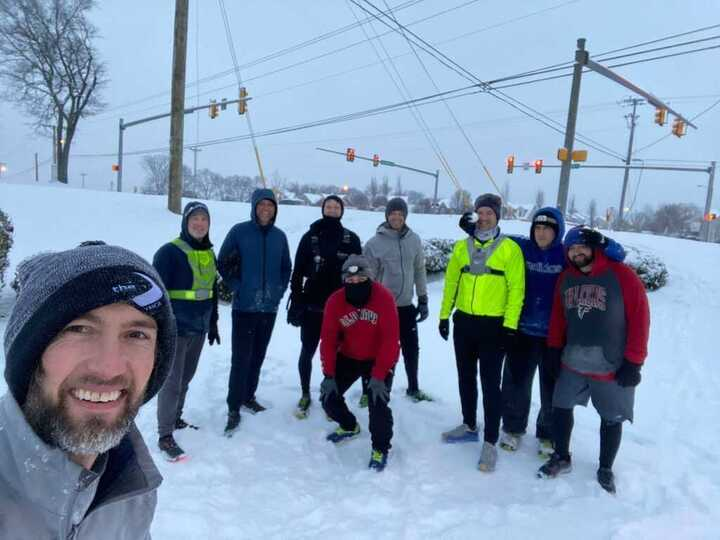